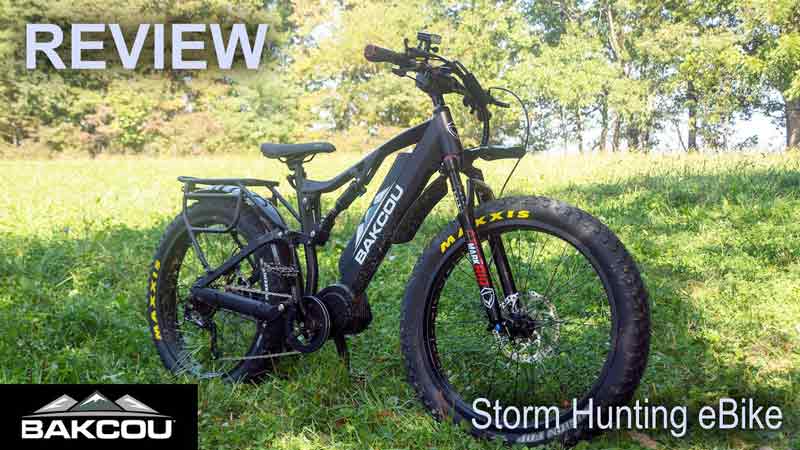 Bakcou Storm hunting eBike Review – I’m here to review the new Bakcou storm e-bike. I’ve been using an e-bike now for the last two deer seasons, and I can say unequivocally that outside of my bow, and my clothing, this is the most important piece of hunting gear. I own especially for whitetail hunting e-bikes are built on a mountain bike frame.

They all have an electric motor a lithium-ion battery to power the motor, and they all rattle ride on fat tires. They are designed for off-road terrain, and that includes trails farms, roads, and meadows. They are silent, leave no scent, and can move you to your tree stand with minimal effort, and more importantly, minimal disruption. 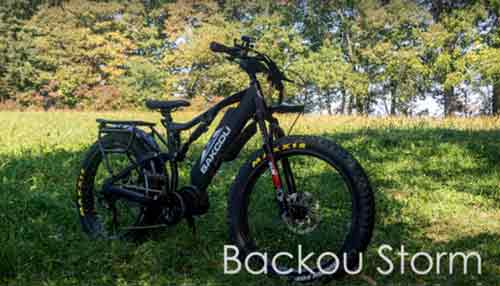 But, not all e-bikes are created equal, that’s especially true. This new Bakcou store the storm is one of the most powerful and rugged e-bikes. I’ve ever seen the bike is shipped direct to you, and some assembly is required. I needed three small tools for assembly, and like most men, I refused to read the instructions.

The bike is easy to put together, and it took me about 40 minutes, had I read the instructions? It would have taken me 20 minutes. The Bakcou storm has some incredible features, but one feature jumped out at me, and that is for public land hunters. 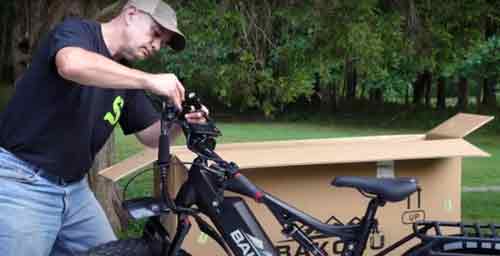 Some states allow e-bike use so long, as they’re 750 watts or less. With the Bakcou storm, you can adjust the wattage. If I’m hunting public land, and that requires a 750-watt bike, I can set that through the on-screen controller. As soon as I am back on private land, I can switch to the more powerful 1000 watt option.

That is a great feature, especially for public land hunters. The storm uses what’s called a smart motor. It has an integrated torque sensor when pedaling. If you’ve used other e-bikes, then you know they can sometimes violently thrust you forward, when pedaling in a high-power setting with the storm, you can keep your bike in high power. 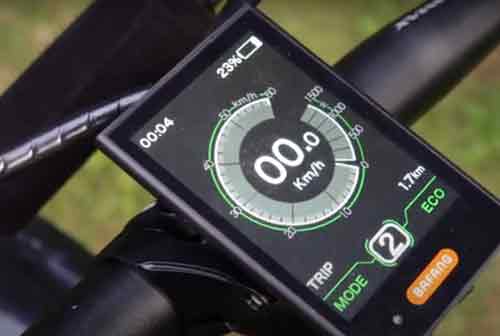 But it senses how much torque is being applied and adjusts accordingly the power on. This bike is incredible, but the most striking feature of this Bakcou storm is the ride. It is incredibly smooth, thanks to a high-end shock and suspension system which is fully customizable based on your weight, and riding style.

No review is complete without a couple of tests. My tree stand test took me down a gravel road, cutting across, a newly planted, clover field across a culvert, then up a pretty decent hill. This is the only time I ever had to pedal. I crossed a lush clover field before turning and heading down to my stand. It was approximately three-quarters of a mile, and it took me three minutes.

Only I did was 20 yards up that one hill. The quiet test was performed entirely by accident. I was recording a ride to check, trail cameras, and as I drove into the food plot, there were five deer feeding there. They were only 100 yards away, and they kept feeding. They never heard me coming. You could see it here, on the GoPro, when I zoom in.

I literally drove right up to him within a hundred yards, eventually, an alpha doe caught me, saw me sitting there on the bike. And they all ran off, but that shows you just how quietly you can move around with these e-bikes. They never hear you coming.

Let’s look at some specs for the storm. The bike uses a smart switchable 700, or 1000 watt bafang ultra mid-drive motor. The ultra motor is widely recognized as the diesel engine, a mid-drive motors except no death is required. There are two battery options available including a standard lithium-ion battery,  and an extended range battery bike range is up to 40 miles, depending on which battery you choose and conditions several factors.

I have done 20 miles, and have 20 percent battery left before I decided to recharge. As I said earlier, the most striking feature was the smooth ride, and that is. 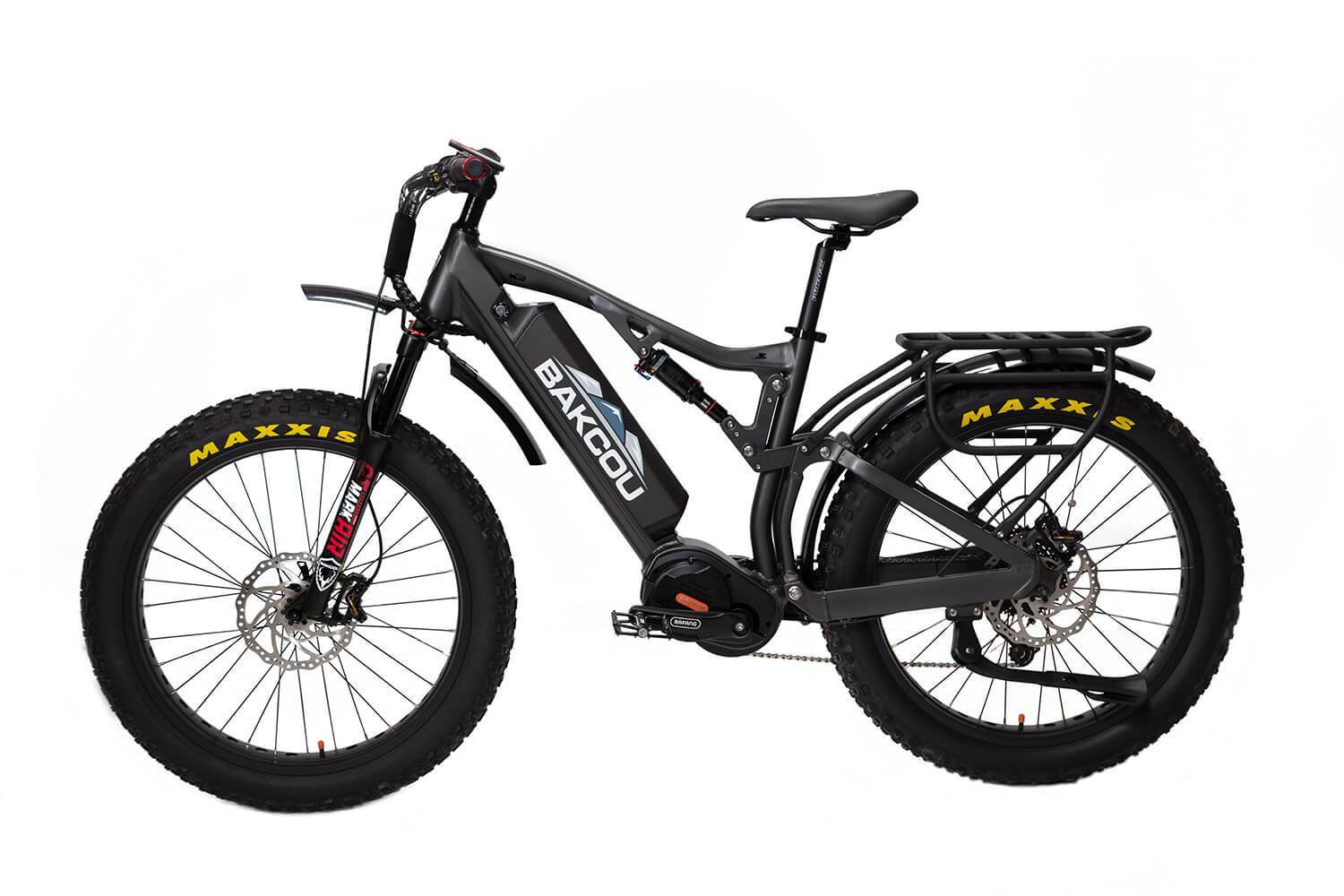 BAKCOU Storm G2 Hunter Package
Price: $5,897.00
BAKCOU Storm G2 Hunter Package – BAKCOU is committed to the design and manufacturing of the most effective electric hunting bikes, bicycle parts, and associated merchandise available on the market. They are uncompromising of their supplies, the method of manufacturing, development of new merchandise, and innovation of the very best quality.
Buy Product
View On Store

Due to the use of these advanced suspension systems utilizing, front shocks, and rock shocks on the rear shifting is done with a nine-speed Shimano Olivio, hill climbing gearing system, and brakes are these powerful Tecto quad piston hydraulics in both the front and the rear. The bike capacity is 300 pounds,  and the storm itself weighs 72 pounds, accessories for the storm are extremely well thought out, and a great complement to the bike.

The bike comes standard with a rear frame that can accommodate two waterproof three-point pannier bags. They mount on a lower bar leaving the top frame available to last gear. The bags can be removed and double as a waterproof daypack when you use them with the included pack strap kit. 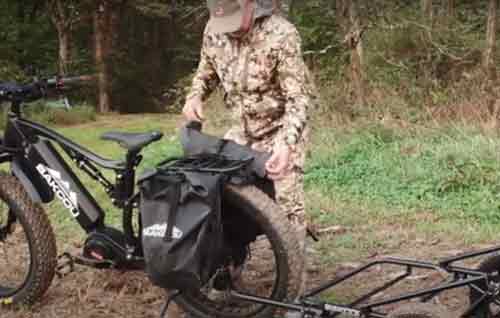 However, I was particularly impressed with this accessory, the folding deer trailer was extremely well. Thought out, it can be used as a deer cart either on or off the bike and when adjusted to life whack can easily carry gear hindquarters or clothing. Finally, an optional headlamp provides 2200 lumens of white with five power settings and hours of continuous use on a full charge.

Bakcou Storm hunting eBike Review – When it comes to hunting, there’s simply nothing better than an e-bike, and as e-bikes are concerned. The Bakcou storm is one of the best on the market. I was extremely impressed with the power. The ride and the thoughtful designs especially with the accessories. If you want to check out more go to the website and check out the storm. They also have their popular mule and other bikes as well. We hope you enjoyed this review and as always have a safe and successful hunting season you.